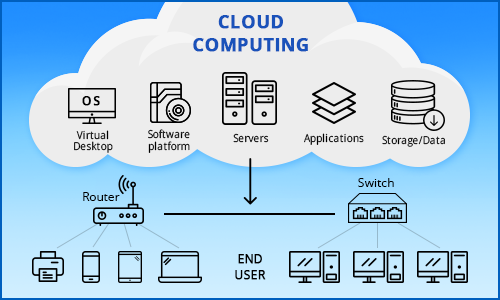 What is Cloud Computing?

Posted by: Emma Gilbert in Technology Leave a comment

What is Cloud Computing? Why do many users find the term Cloud Computing unclear? Maybe because most of the IT people who use it don’t know that they do or have too little information about it.

Many of us use Cloud Computing daily, and in a nutshell, it is the term by which we describe different situations in which computing or operations resources are delivered as a service over a network connection. In other words, it is a computational system that relies on the sharing of physical or virtual resources such as software or hardware, eliminating the need to have those resources in your office or home. 100 users do not buy each one a computer, a server or a software system; but these 100 use a service consisting of a conglomerate of servers or software systems that provide each of them with a small part of it, as needed.

Cloud computing differs from traditional systems in that it offers several key features. The most important of these is flexibility. We are talking about the adaptive power of cloud systems, also called scalability. Cloud technologies allow you to adjust the amount of resources allocated automatically, as needed. It is always sought that the level of resources allocated is only slightly higher than the level of resources consumed. It is a defining difference compared to the classical systems. The model for delivery of services with a fixed quantity and quantity disappears, at a fixed price paid in advance. When we talk about the cloud, you only pay for what you consume. We are talking about a huge increase in efficiency and cost control. Basically, the cloud system saves itself by building it. And, let’s be serious,

Of course, I was telling you about advantages and not advantages. The cloud is not just about flexibility. Cloud Enterprise models also benefit from the potential for mass growth of work environments. Once we have a functional system in the Cloud, it can be replicated or duplicated within minutes. Also, another advantage that we find enormous and invaluable is reliability. The cloud works by splitting information across multiple servers, but without creating a fixed technical dependency between them. So, at any time, if a server becomes unusable or has a malfunction, for whatever reason, the rest of the systems can compensate for its failure. This situation could be devastating for a classic system. Imagine you have an online store hosted on a classic server and it drops exactly on the first night of Black Friday. Yes, exactly, it’s a nightmare! However, if you were inspired to host the store on a Cloud system, you can sit still. As opposed to how a dedicated server works, in case of cloud computing if a server crashes, the rest of the systems have already taken over, without interruption.

Cloud services can be divided into the following two categories: private and public.

A Public Cloud refers to that system where the services and infrastructure are provided by a third party, outside the location where the process is actually carried out. The services are accessed through a public Internet network. This kind of cloud offers an economical solution and a lot of scalability, but due to the high level of accessibility it is quite vulnerable to cyber attacks.

The Private Cloud, however, is located in a private network, managed by a team or security expert, having a service platform and infrastructure accessible to a client or a limited and clear number of customers.

There are also hybrid cloud solutions that combine the public model with the private one. It is true that a hybrid model can maximize efficiency in some cases, but it is primarily aimed at storing or processing data that is not of great importance or confidentiality.

The most common and most commonly used is SaaS. It refers to a product model in which applications are hosted by a provider and are available using a private infrastructure, via an internet connection. Many people use a SaaS without realizing that the web applications that they use are delivered in this way. Here are 3 examples from our daily lives: Gmail, Facebook and Twitter. At the same time, if you shop online at the big retailers stores, it is very likely that the invoice or receipt you received will be delivered through a SaaS system.

PaaS is a different category and is aimed especially at developers. PaaS services are usually delivered to developers who need an environment in which to build their applications. In terms of flexibility, this type of client knows what third-party components, operating systems or programs he needs and is looking for a Cloud provider that can meet his requirements. The factor or power of replication of this service for the developer is important, not infrequently requiring the addition of two or more development mediums in a short time. For a company developing a web application, a trusted PaaS provider can save a ton of money. Not to mention the huge benefits for a team of developers spread across 3 continents.

IaaS refers to infrastructure, by the definition of the term. It is thought of as a suite of virtualized resources gathered under one service, through an internet connection. It is the Cloud solution that has the strongest connection with the physical part, with the hardware, with the computational infrastructure. IaaS offerings include resources such as virtualized disk space, flexible and highly accessible storage space, multiple and multiple connections, IP addresses with special destinations or other special features. The resources can be taken from a conglomerate of servers, they can even extend to several data centers, but also the clients can create their own infrastructure.

One by one, we think it is clear to everyone that this Cloud is not something to be scared or misunderstood. The cloud has become and will be the solution of the future for a long time, as the whole Internet industry has chosen to develop its influence or branch out to be useful to any domain.

Previous: The connection between an access device in the hosting account and their security
Next: Examples of using VPN Services

Home Security in a Smart and Interconnected World