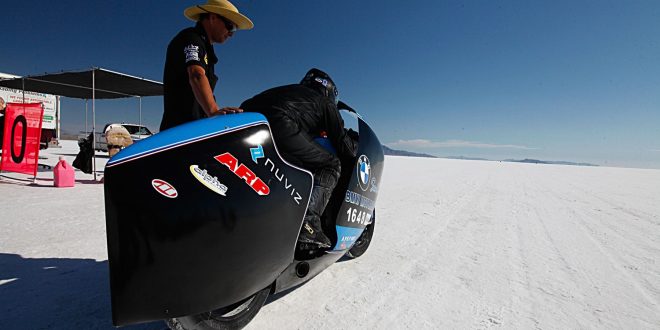 Posted by: Emma Gilbert in Auto & Motor Leave a comment

You can set a Guinness World Record for anything from eating baked beans with a cocktail stick (which, incidentally, is 271 in five minutes) to the official land-speed record of 763.035mph that was achieved by Andy Green in Thrust Super Sonic Car in 1997.

Each record has its own set of unique challenges to overcome and any that are based around speed will have an effect on the human body. Here are ten of the best two-wheeled Guinness World Records involving speed and how setting the record would have impacted on the challenger’s body.

In 2016, TV star and truck fitter Guy Martin set an incredible speed of 78.15mph on the world’s largest Wall of Death. Travelling at such speeds on the 40-metre diameter wall subjected Guy’s body to forces of 5.2-g, which caused his blood to drain away from his brain, leading to tunnel vision, temporary blindness and even potentially a loss of consciousness. After the attempt, Guy admitted to losing vision briefly while on the wall during the run.

In 2012, American rider Jesse Toler rode for 402.42 metres on his front wheel to set the stoppie world record. During this attempt, Jesse was bracing not only his weight, but also battling the deceleration forces through his arms on the bars and knees, as he gripped the tank for extra support. All this while also concentrating on balancing the stoppie using tiny movements of the front brake lever.

Joe Dryden rode 2.23 miles whilst performing a rolling burnout on a Victory Octane in 2016. While the challenge itself wasn’t the most physically demanding, Joe did have to concentrate hard on his throttle and front brake application to ensure the rear wheel kept spinning during the entire run. The plumes of tyre smoke probably didn’t do much for his lungs either.

Guy Martin and Triumph attempted to beat the record for outright two-wheeled top speed in 2016, but failed and so the American Rocky Robinson still holds the record. In 2010, Robinson travelled at an average of 376.363mph over one kilometre with a top speed of 394mph. Sheltered in the streamliner’s cockpit, Robinson was protected from the windblast, but the attempt required massive amounts of concentration as well as lightning fast reflexes on the bike’s controls to keep it in line and stop it from crashing. No doubt Martin will try for many other records as he keeps pushing the limits of what can be done on two wheels. But these challenges don’t just require skill and bravery – just imagine how many bikes he will have to get insurance for!

While not technically a motorcycle, the achievement of setting a speed of 61.18mph on a monowheel by Kevin Scott in 2015 was still impressive. As well as being cramped into a sitting position inside the wheel with a motor between his legs, Kevin had to balance the bike and avoid gerbilling, which is when the rider loops around the outer wheel rather than the wheel rotating around the rider – just like when a gerbil gets it wrong on their wheel!

In 2008, off-road legend and general nutter, Robbie Maddison, flew an incredible 351 feet to set the Guinness longest motorcycle ramp jump record. He has since jumped an even greater distance, reaching 392 feet. As well as having to take a lot of the impact through his legs and spine when landing, while in the air Maddison had to modulate the bike’s engine and rear brake to alter its trajectory and ensure he hit the landing ramp correctly. Landing is the hard part and Maddison has undergone a lot of back surgery due to the force of the impacts transferred through the bike’s suspension and into his body.

In 2015, Gianfranco Bianchi rode his Suzuki RMZ 450 an impressive 21,230 feet up the Ojos de Salado Volcano in Chile. As well as having to battle altitude sickness, which happens when the brain is starved of oxygen and causes horrific headaches and even a loss of consciousness, Bianchi also rode in temperatures of minus 20-degrees and in 50mph winds.

Although Guinness lists the world wheelie record at 191.3mph, in 2016 Gary Rothwell recorded a 209.82mph wheelie on his turbo Suzuki Hayabusa. One of the major issues Rothwell discovered during practice was double vision caused by the wind vibrating his head at 200mph! It was so bad he started to only look where he was going through one eye! For the record attempt, he fitted a small fairing to reduce the amount of wind blast.

In 2015, Robert Gull wheelied his BMW S1000RR at 128.06mph while riding on ice! The fact he was on ice and not tarmac required even greater levels of control. The rear wheel of his BMW was covered in inch-long metal spikes to allow it to gain traction on the ice, making the bike horribly unstable at speed.

Nick Sanders managed to travel the 19,300 miles required circumnavigating the world in just 19 days and four hours on his Yamaha YZF-R1, averaging 1000 miles a day. To achieve this, Nick deprived himself of sleep and only allowed himself a power nap of fifteen minutes every three or four hours to keep his body going. Every three days he treated himself to just three hours’ sleep in a hotel bed. According to Nick, setting the record for circumnavigating the world is more a mental challenge than a physical one!

Previous: 5 Real Estate Trends to Hop on in 2017
Next: Green Web Hosting – an Overview

Why Winter is the Best Time to Buy a Car

Consider Several Options when Looking to Depart with Your Car

The Most Expensive Mistakes to Avoid After a Car Accident