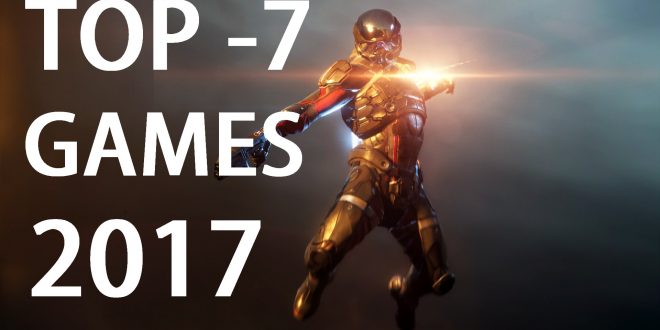 Posted by: Emma Gilbert in Fun Stuff Leave a comment

We have been provided with some world class game releases in 2017 and can definitely expect some more impressive titles during the remaining part of this year! Below, we have put together a list of the top 7 most popular games in 2017. You will be sure to remain occupied while playing these amazing games! If you are searching for some terrific titles to get pumped up or even planning to create a wish list, then start right here! The following list was built in collaboration with the team at Geek Gamer.

Till now not much detail for this game has been revealed. As a matter of fact, State of Decay 2 is a sequel to the State of Decay (2013) and is going to target seriously on cooperative gameplay. In general, we can describe it as a zombie-survival game where the gamers are able to have their own unique story. An important facet of the forthcoming title release is combating zombies and the gamers must create their own community that is capable of eliminating the undead threat successfully.

Fumito Ueda, the creator of Ico and Shadow of the Colossus, developed this fantastic game which mainly deals with the connections between a bizarre beast known as Trico and an unnamed guy. Gamers are required to play out through puzzles and exploration; however, the emotional bond with Trico makes this game really awesome.

In real life pigs and flying are totally opposing things. However, you can observe a flying pig while enjoying this video game which is developed by NetEnt. Nevertheless, the main character of this game is actually a daring astronaut who is prepared to go to outer space where no pig has ventured previously. The game’s bonus round will start when he is going to be released into orbit and you can expect your profits to go sky high.

Nowadays, Resident Evil 7 has become immensely popular amongst the gamers across the globe. Unlike the earlier versions, one significant modification of this game will be playing it in a first-person viewpoint. The game is about to happen 4 years following the incidents of Resident Evil 6 in a city called Dulvey, Louisiana. Ethan, a guy who is looking for his missing spouse, will end up in a mansion which happens to be the dwelling place of the Baker family. It appears that while making an attempt to find the clues of his missing partner, Ethan will also need to break free from the cannibalistic Baker family. The good news is that the developer of this game, Capcom, is going to provide the players with PlayStation VR and various other useful features in near future.

The Metal Gear Survive game appears exciting in spite of the fact that it is not your regular Metal Gear Solid title. A wormhole opens up with the departure of Big Boss from Mother Base, and it starts absorbing the rest of the troops. You will discover yourself against a multitude of aggressive zombies at this point. Will it be feasible for you to find the materials required for coming back or will you be left as an easy dinner for the vicious opponents?

Even though the name NRVNA might sound familiar to you, do not expect Kurt Cobain to perform on the monitor. On the other hand, prepare for the Next Experience on a glowing background along with spectacular animated graphics. This game is all about winning big while also having an excellent time.

While going through ancient folktales we are acquainted with powerful emperors, gorgeous princesses and also the brutal fights of courageous knights with ferocious dragons. When you play Castle Builder, you can hope to see the identical action; however, this game goes one step further. Castle Builder sets innovative standards in video gaming with your actions having an immediate effect on your gains. Creating the most costly castle for the princess and her prospective partner utilizing the most precious materials is going to be your primary target while playing this game. Additionally, it is important to select the right spouse nominee while obtaining enough gold in exchange.

Tips For Trading In Sports

Guide To Leveling In The Mists