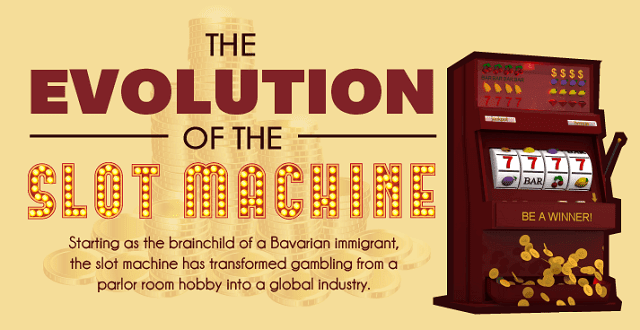 Playing online slot machine games has become one of the most popular pastimes in the United Kingdom, US, Nordic Countries and the world in general. You have the ability to win big from the comfort of your own home while being entertained with a wide range of games to suit every taste and budget. However, do you know the history behind this popular past time? It is an interesting one and here we will discuss it in more detail.

The very first slot game can be traced back to the 19th Century and was developed by Sittman and Pitt of Brooklyn, New York who created a gambling machine in 1891. It was made up of five drums which held a total of 50 card faces and was structured on the card game poker, which is still popular in casinos around the world today. The machine proved to be very popular in bars all over New York and paved the way for things to come.

One of the main problems with the original poker-based game was the huge number of possible wins. This meant it was almost impossible to develop a machine that would be able to do an automatic payout for each possible winning combination.

This problem was solved by Charles Fey of San Francisco sometime between 1887 and 1895 when he came up with a simpler device that was made up of three spinning reels with five symbols: spades, diamonds, hearts, a Liberty Bell and horseshoes. The bell is what gave the machine its name.

By replacing ten cards with five symbols and three reels as opposed to five drums, it became a lot easier to develop an automatic payout mechanism, which Fay did. The machine proved to be immensely popular to the point where Fay could not keep up with the demand and others started to copy his design.

In 1907 Herbert Mills created a slot machine called the Operator Bell which dispensed chewing gum and sweets to get around the 1902 ban of these machines. A year later the machine was found in most bowling alleys, shops, salons, and tobacconists across the United States of America.

Fast-forward to 1964 and the first entirely electromechanical slot machine is released by Bally. Even though the machine was entirely electric, a lever still needed to be pulled. This was mainly because developers realised that players needed the familiarity of the lever at the time. This machine also boasts having the first bottomless hopper, which meant that payouts of as much as 500 coins could now happen.

The impact of the Internet on Casino Slots

Previous: How to Remove Dark Spots Caused by Acne
Next: How to Advertise Your Wholesale Business

Your Erb’s Palsy Child May Qualify For SSI